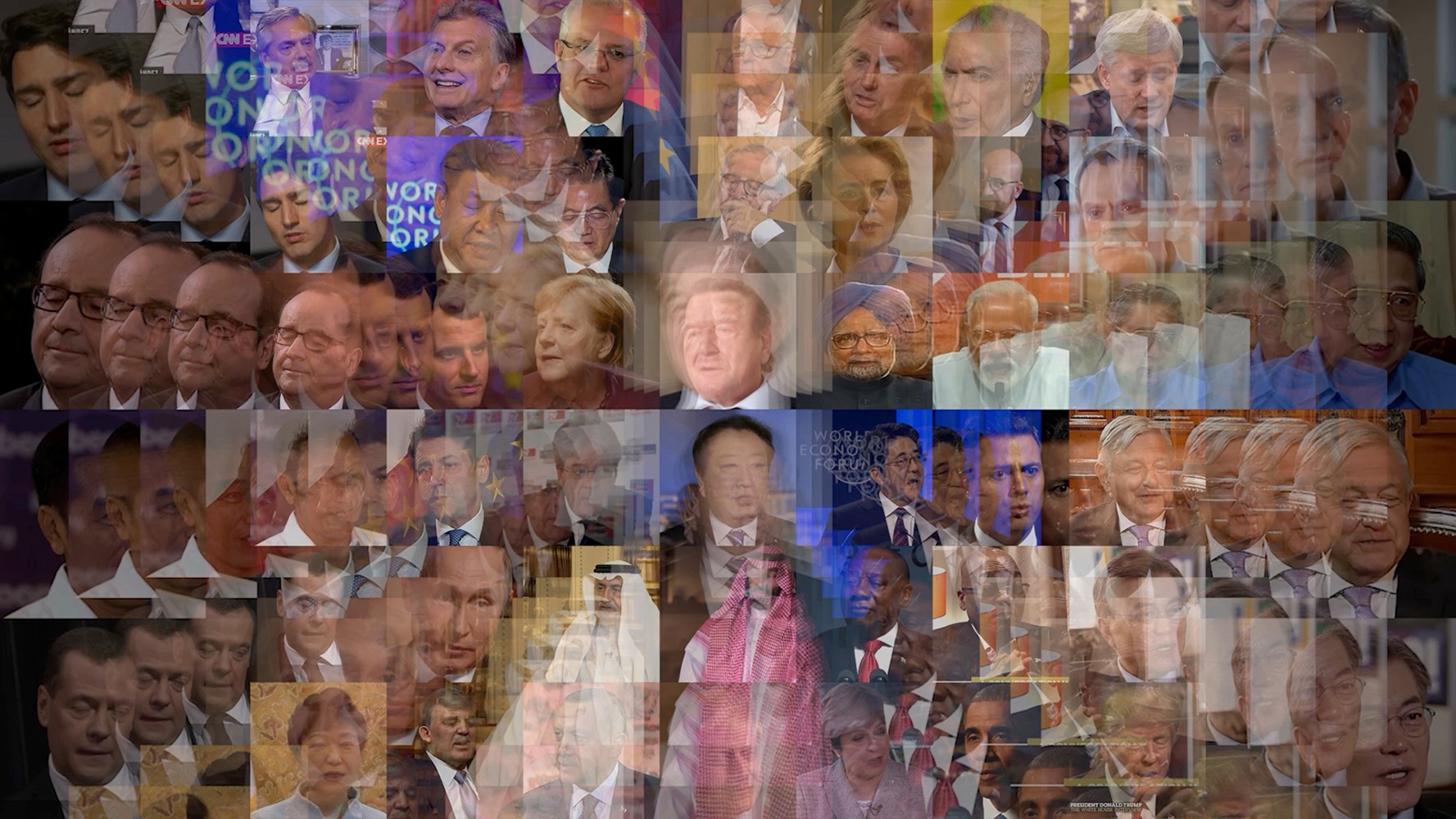 “Democracy was once a word of the people, a critical word, a revolutionary word. It has been stolen by those who rule… to add legitimacy to their rule. It is time to take it back, to restore it to its critical and radical power.”
– C. Douglas Lummis

Heavy-Eyed Tyrants and Boring Machine Operators is a medley of current and preceding heads of state of the Group of Twenty (G20) turning a blind eye on the will of the people. While the abstraction of ‘the will of the people’ relies on a mythical ideal of participatory democracy (in most of the depicted member states), a political system that disempowers its constituents in favour of markets, production, competition, privatisation, commodification, and profit above all else, including social issues, it was nonetheless the best starting point for me to initiate the project. In my mind, the fabled ‘world leaders’ are the boring machine operators of a monotonous political machine (a machine built on enduring primeval myths and ancient dreams). The operators are disinterested, banal, mundane, oblivious, and dull: looking without seeing, taking no notice, paying no attention, tuning out, ignoring, evading, misconstruing, and burying their heads in the proverbial sand. I used both current and preceding heads of state because I wanted to capture both sides of the political spectrum, as it has become increasingly clear that politicians on both sides are thoroughly committed to the status quo. They don’t represent the people who elected them; rather, they bow to the commands of the super-wealthy—the financial institutions, the multinational corporations with their powerful lobbies, and the ostentatious elite—and to their own (self-interested and greedy) ambitions. Those in charge—namely, those with money—are (calculatingly) blind to the will of the people. Nonetheless, while politics is a heated area of debate, I didn’t want to engage in this despairing exchange; instead, I wanted to question the assumptions and the prophecies of our relentless commitment to the past and present forms of political systems being treated as ends in themselves. To do this, I pumped the mundane machine operators through my own (imaginary) machine. A montage machine that condensed space, time, and information to blur all preconceived notions. Besides, I don’t think it’s surprising to see that capitalist democracy is facing a profound crisis—citizens around the world are disenchanted with politics and have little faith in their governments doing the right thing by them. However, real power still resides with the people, if they choose to exercise it. It is we, the people, who are asleep at the wheel (a super cheesy concluding sentence, I know).

* The G20 is the self-professed “premier international forum for global economic cooperation”. The members of the G20 are Argentina, Australia, Brazil, Canada, China, France, Germany, India, Italy, Japan, Republic of Korea, Mexico, Russia, Saudi Arabia, South Africa, Turkey, United Kingdom, United States and the European Union. G20 members account for 85% of the world economy, 75% of global trade, and two-thirds of the world’s population, including more than half of the world’s poor. For me, the last statistic says it all…