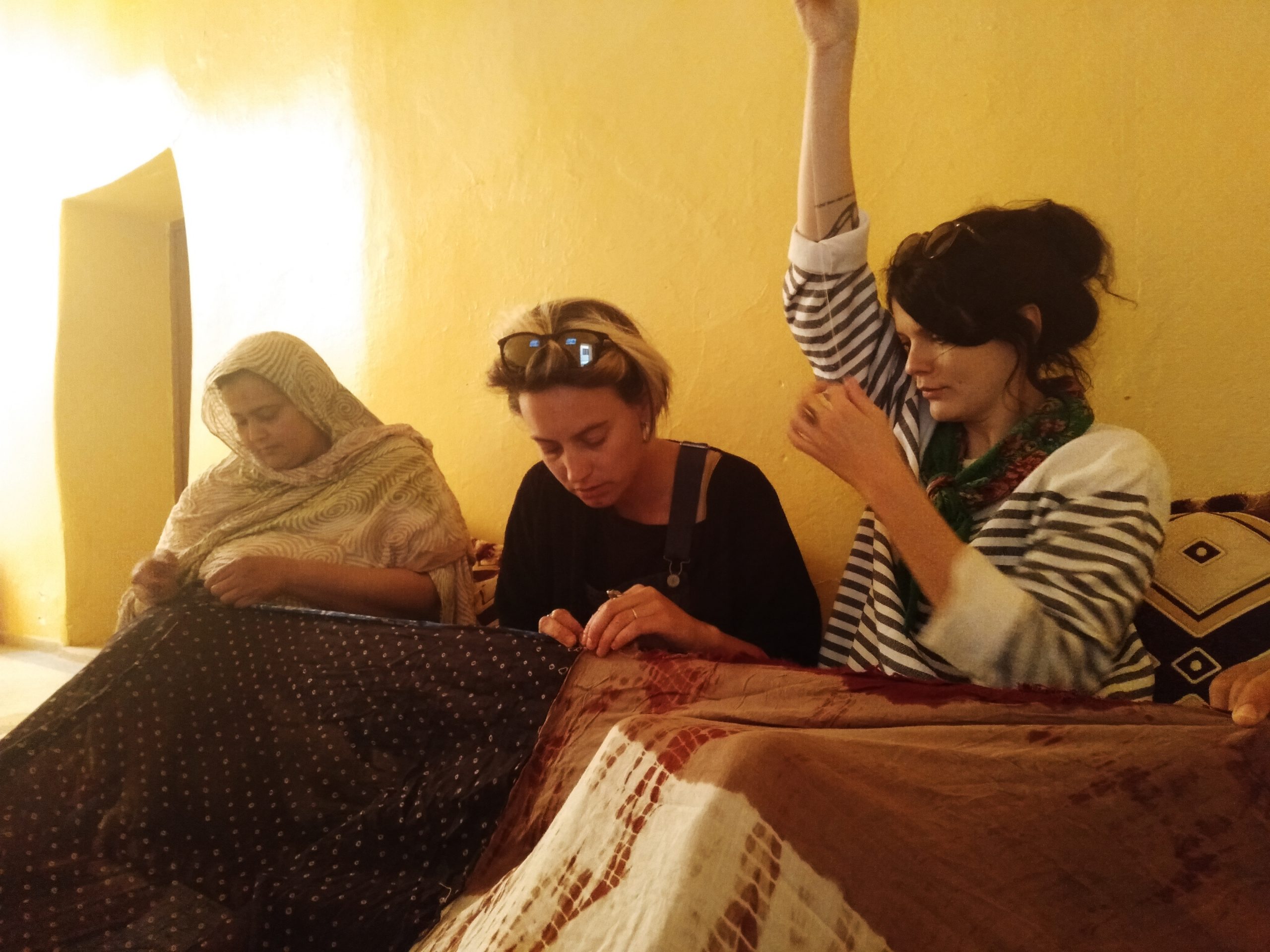 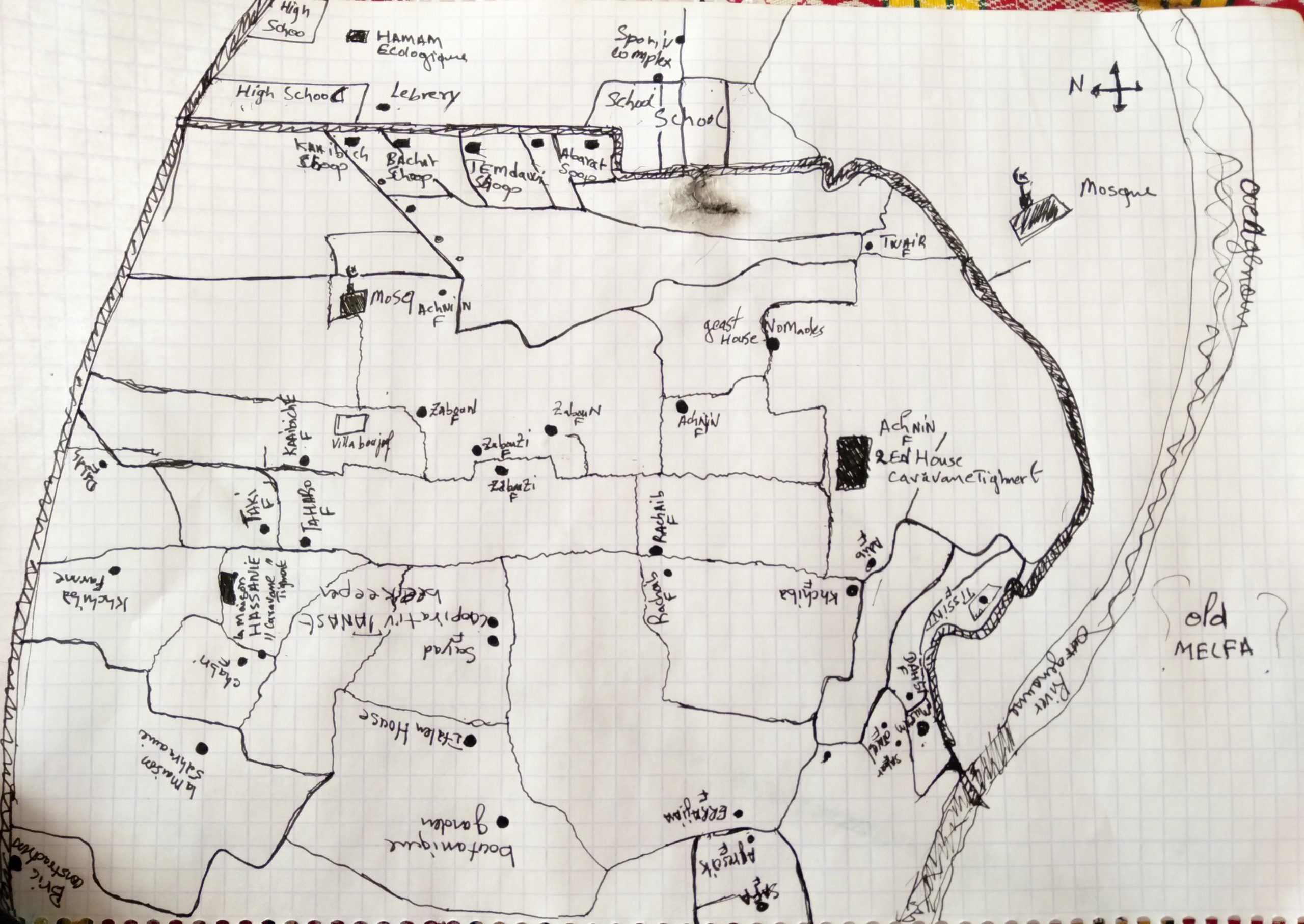 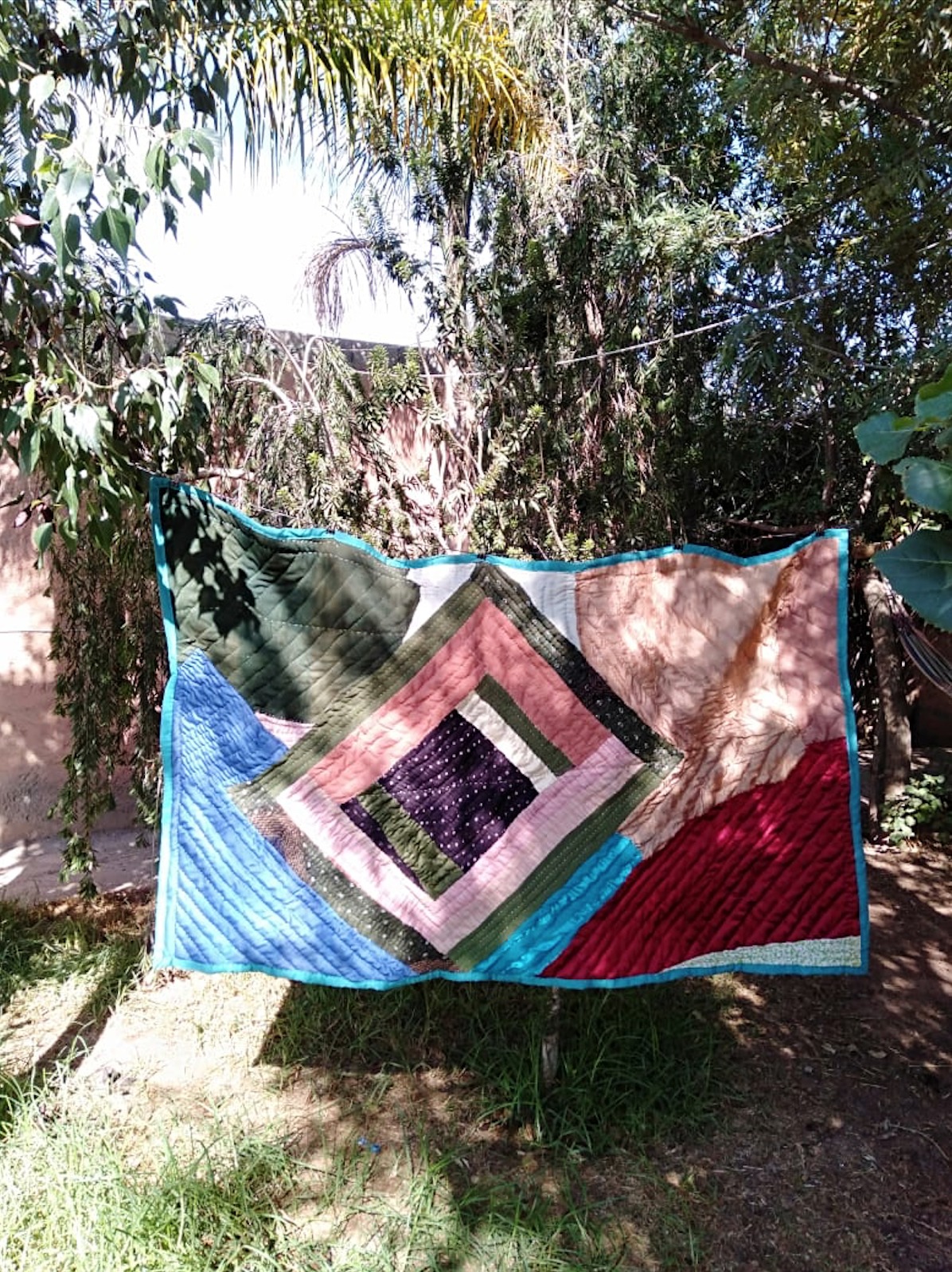 ‘Khayma’ is a project by Belgian visual artist Hanne Van Dyck and Czech anthropologist Alexandra Kolarova, both living in Marrakech, Morocco. ‘Khayma’ came to being during Caravan Tighmert, a cultural laboratory in the oasis of Tighmert in South-West Morocco. In the region, they create patchworks from old Melfa, large batik fabrics imported from Mauritanië that women wear. The patchworks were one of the last products the caravans brought to Morocco and are made in the form of tents or shelters to protect from the sun. During a wedding, for example, two families join to create a Khayma, a tent, in the courtyard.

Asking the organizers of Caravan Tighmert about the absence of women in public space, they said you just have to knock on doors. We started the project by asking them to make a map of the oasis with all the houses on it. We went from door to door with this map and a recording in Darija, moroccan Arabic, asking for a piece of old melfa and some time to stitch it together to make a khayma that combines pieces of fabric from different families in the village. The map was used as a working tool for us and as a means to communicate with the women. Using the map, we could make clear how we wanted to work, and which pieces of fabric we collected where.

After a week of collecting and collectively stitching this khayma, we organized a maarouf with Soukaina Dabbah and Rachida Dabbah from the oasis. A marhouf is a meeting where women come together to eat and celebrate. The khayma was installed in a place carefully curated so no men could have access. Around twenty-five women from all different ages came together to eat a communal dinner, sing, and dance. In the pictures the women are absent, they don’t like to be photographed but they let us record the dancing and music at the end of the evening.

Hanne Van Dyck continued working on the project. Inspired by the quilts of Gee’s Bend, she transformed a khayma she bought on the weekly market close to Tighmert into a series of quilts. The quilts of Gee’s Bend are the result of both geographical isolation and an unusual degree of cultural continuity and eventually ended up in museums worldwide. Just like the khayma’s in Tighmert, they are born of scarcity and resourcefulness and made collectively. There are geometrical resemblances between the practices of these small, remote communities both using improvisational and bold compositions that transform recycled cloths and fabric remnants.

In August 2020, a fire destroyed a third of the oasis of Tighmert. We have not been able to return there due to the crisis but are planning to return in March 2021. If selected for the exhibition, we will discuss with the women the possibilities of showing the project and the khayma’s in a museal context, a context largely unknown to them. The khayma itself is left in the oasis, we wanted it to be an object that the women can use when they want to come together instead of an ‘art object’. The concept of the map will be applied as a way to discuss how to put this traditional practice on a broader international map, how to visually represent processes, and how their collective ways of making are applied in times of crisis to rebuild their community and village. Just as in the process of creating a khayma, they are collectively repairing what’s broken. This new encounter will formulate how the project and outcomes can be exhibited.

Pictures of the setting, the process, the food, the map, an audiorecording, and an article by Alexandra Kollarova can be accessed through this link.