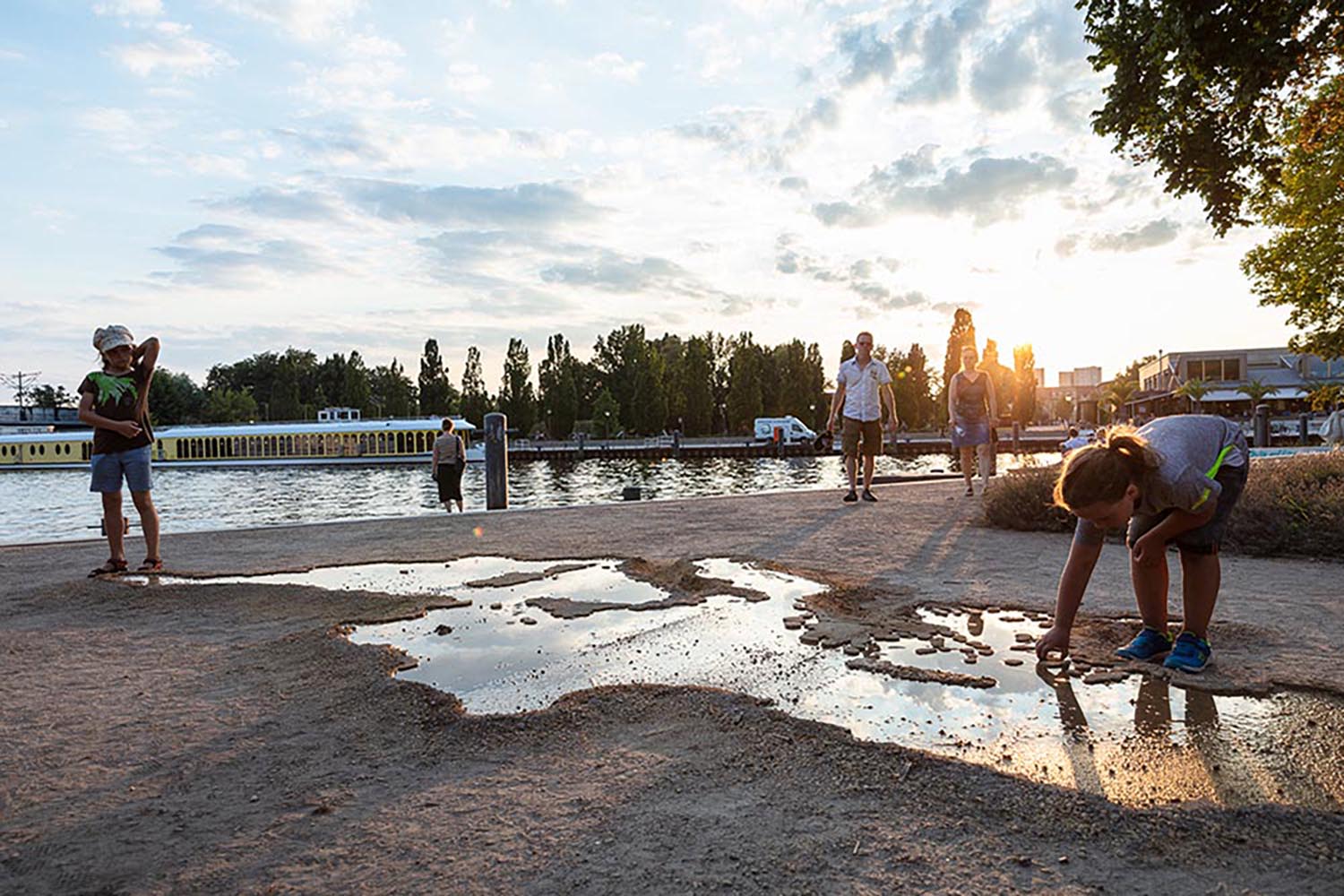 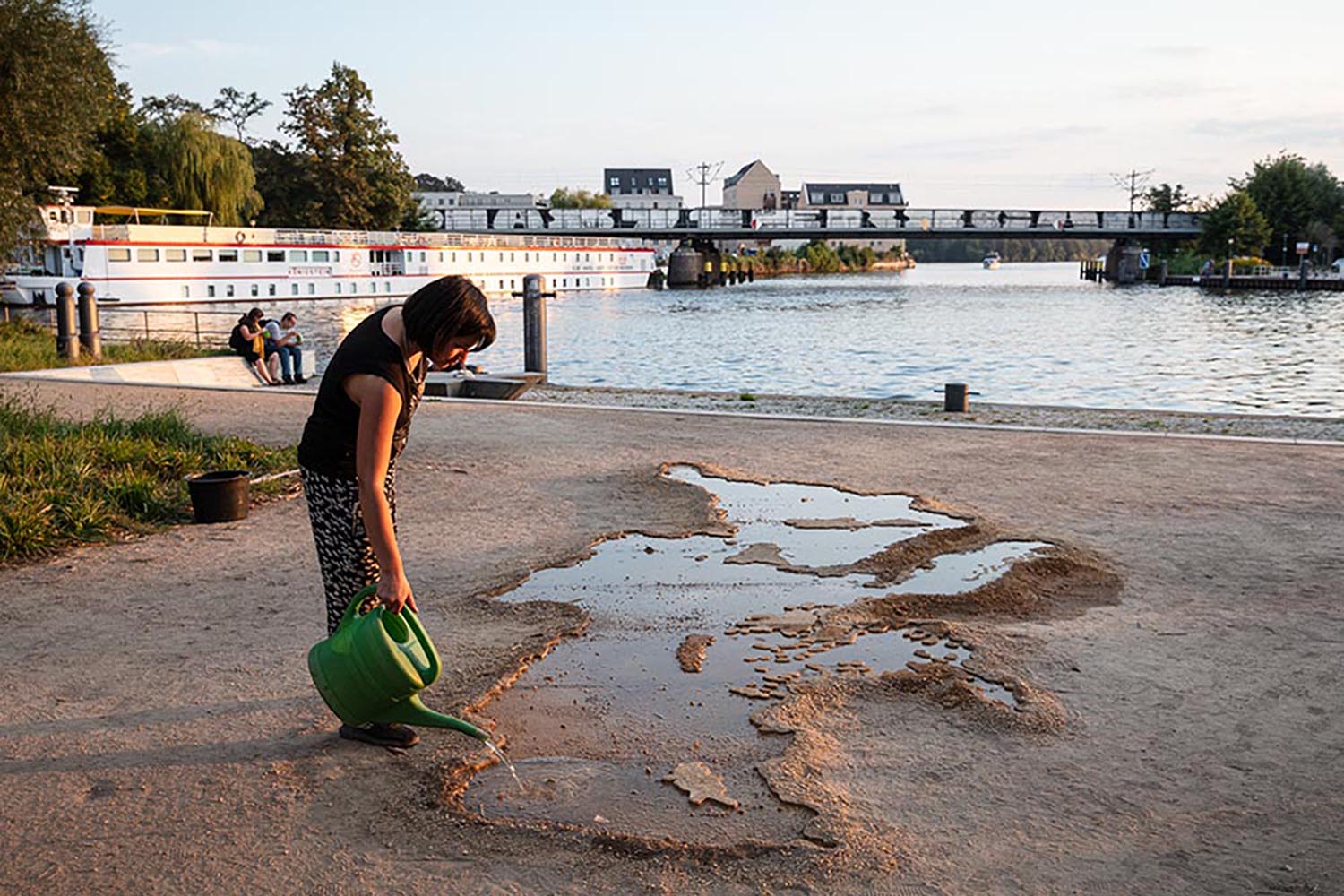 2018, water on floor, variable dimension.
Mèdius Terràneus is an installation that stencils, with a thin level of water, the Mediterranean Sea in the middle of the exhibition’s space.The public is invited to walk around it and perform a circular movement. This action embodies exchange and communication around a threatened and unstable body of water inside its borders.
Mediterranean Sea: f rom Latin: Mare (Sea), Mediterrāneum (in the middle of land, inland) ‘the Sea in the middle of the Earth’ . This sea works as a platform of exchange between continents, countries and cultures by being an important waterway for the trade between Asia and Western Europe.
Conversely it also traces a sharp division between north, south, east and west. It functions as a policed border which tries to block, and even drowns, thousands of migrants and refugees coming from Asia and Africa to Western Europe.
A threatened sea where political decisions try to perform the function of welfare and exchange in contrast to their record of ecological damage and human tragedy.
To underline this tension, comes the artistic choice to represent the sea in an ephemeral liquid layer, a precarious bubble, which threatens to explode at every too-abrupt passage of the spectators.
Mèdius Terràneus was born from research studies in the field of arts and geography with particular attention to cartography. As prompted in the call, cartography has various limitations: one that man often forgets is its reductive and selective trait necessary for the ambitious task of representing the Earth in a two-dimensional scale image.
Under this point of view the collaboration between art and geography is a very original and stimulating union, given that art has always been nourished by images.
In my small way, I wanted to contribute to this line of research by subverting the classical cartographic vision of the mediterranean area. By playing with the image of the sea and its natural boundaries, I created a “cartographic bewilderment” in the viewer with which I hope to highlight both the physical-geographical connective role of the sea, as well as its function as a political and humanitarian divider.
This bewilderment is possible thanks to two factors. The first is that, generally, man has difficulty in recognising the specific shape of seas and oceans if taken out of their cartographic context, whereas he manages the inverse process well: that is, recognising the decontextualised shape of a country. Unfortunately this implicitly highlights the little attention that is given to the study of the aquatic world.
My installation creates further bewilderment by presenting the map removed from its classic frame where the cardinal points necessary to its reading can be pinned. If conventionally the geographical north corresponds to ‘above” and the south to “below”, in the Medius Terraneus the viewer approaches the installation from different perspectives and these conventions are subverted.
After an initial cartographic bewilderment, once the image has been recognised, the common reaction of the viewer is to mentally position the countries that overlook the sea, beginning an abstract cartographic reconstruction and making the map their own.
During this process, the viewer may realise that true geographic distance does not match the distance implied by media reports. For example, events in North African and Middle Eastern countries are presented in European media as much more distant than they truly are. Unconsciously we imagine a larger geographical separation. In this context one may find that in a map, there are invisible political and economic borders that are stronger than the national frontiers drawn on paper.