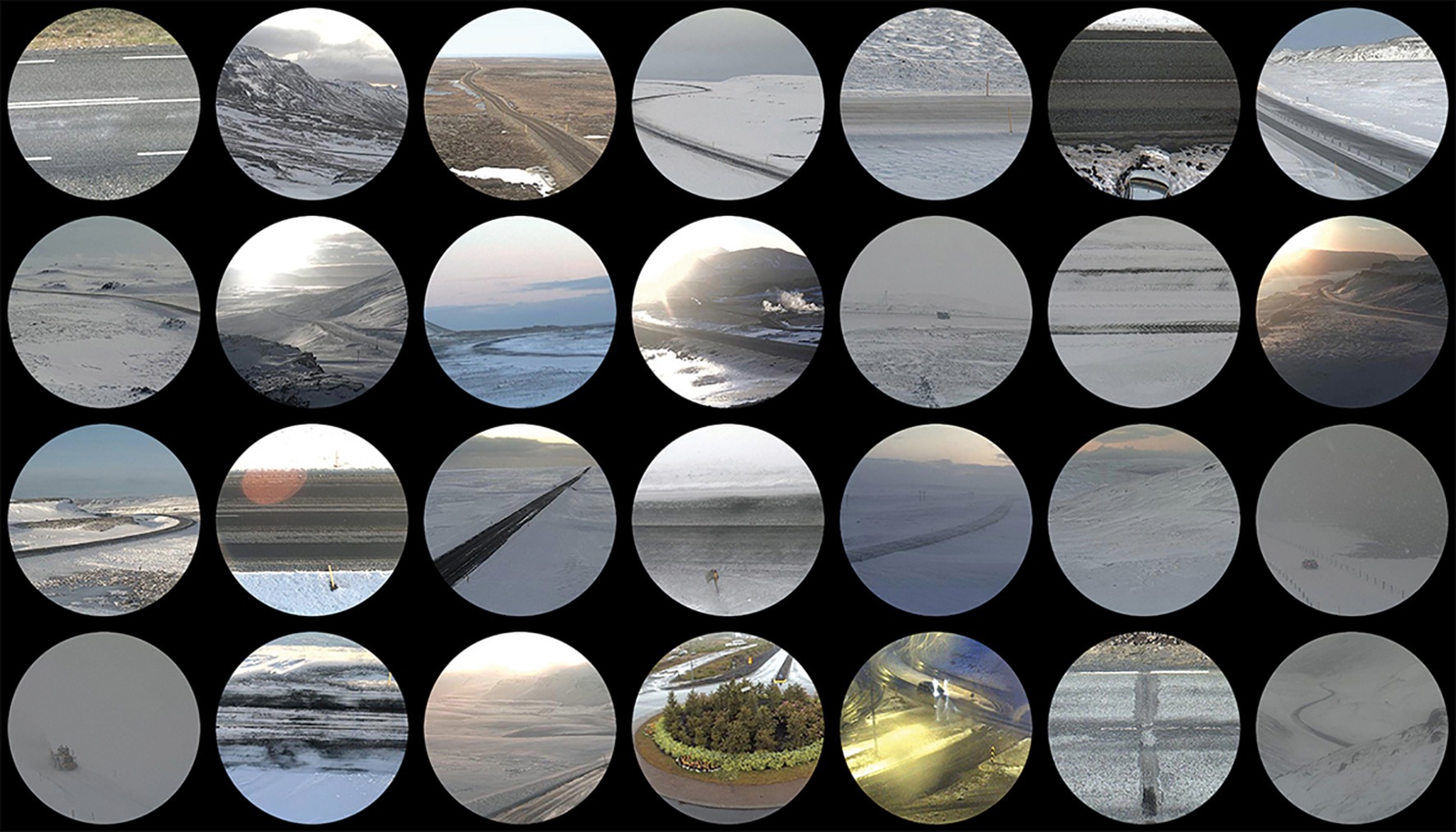 Spukhafte Fernwirkung involved manually collecting every photo uploaded to www.road.is—a website that uses a vast network of webcams to show the road and driving conditions of Iceland—each day for a year. I started collecting the images in early 2017 while undertaking a self-funded residency in Skagaströnd, Iceland and finished collecting them a year later in the same small town thanks to the generosity of Arts Queensland funding. During the months in-between, I continued collecting the images from my studio—which for me is a Wi-Fi connection, a laptop, and a few too many external hard drives from wherever I happen to be located in the world. I spent another year after that creating the work. I missed trudging around Iceland in my snow boots, so engaging with the landscape remotely for two years was a way for me to stay connected to the country. Moreover, whereas the digital is dominated by metaphors of space, with terms like cyberspace or virtual reality, I was interested in time, because time is (digitally-speaking) ignored, or viewed as a frustration—the time it once took a dial-up modem to connect to the Internet, or how long it takes to download something. I was also drawn to the low-resolution nature of the images—measuring just 640 by 480 pixels each—which gave them a glitchy, yet painterly quality. Nonetheless, while digital in nature, I view the work as a hybrid process between a (long durational) plein air painting and (post-capture) computer processing. The webcams are located perpetually outside, constantly capturing the landscape(s)—before I, in turn, captured their capturing of the digital terrain. Basically, I don’t believe an artworks digital status should alter its perceptual experience or appreciation. Besides, I wanted to explore a different aspect of Iceland to that of the tens of thousands of photographers and videographers who travel to the same locations each year to portray Iceland as a wild, rugged, and untouched otherworldly landscape. I’m more interested in exploring the disappearance of clear boundaries between culture, technology, and the environment, so Route 1 (the Ring Road), which runs around the entire island connecting most of the country’s inhabitants, as well as the most popular tourist attractions, was for me a more interesting subject.

* Spukhafte Fernwirkung, or spooky action at a distance, is the term Einstein used to sceptically describe quantum entanglement—the phenomenon whereby if we observe a particle in one place, another particle, even if it is light-years away on the other side of the Universe, will instantly change its properties, as if the two are connected. This is because for quantum particles there is no definitive state of being, they exist in a cloud of probabilities—until observed. Moreover, the observer effect theory suggests that more than simply disturbing the particle being measured, observation produces it, by compelling it to assume a single defined state.