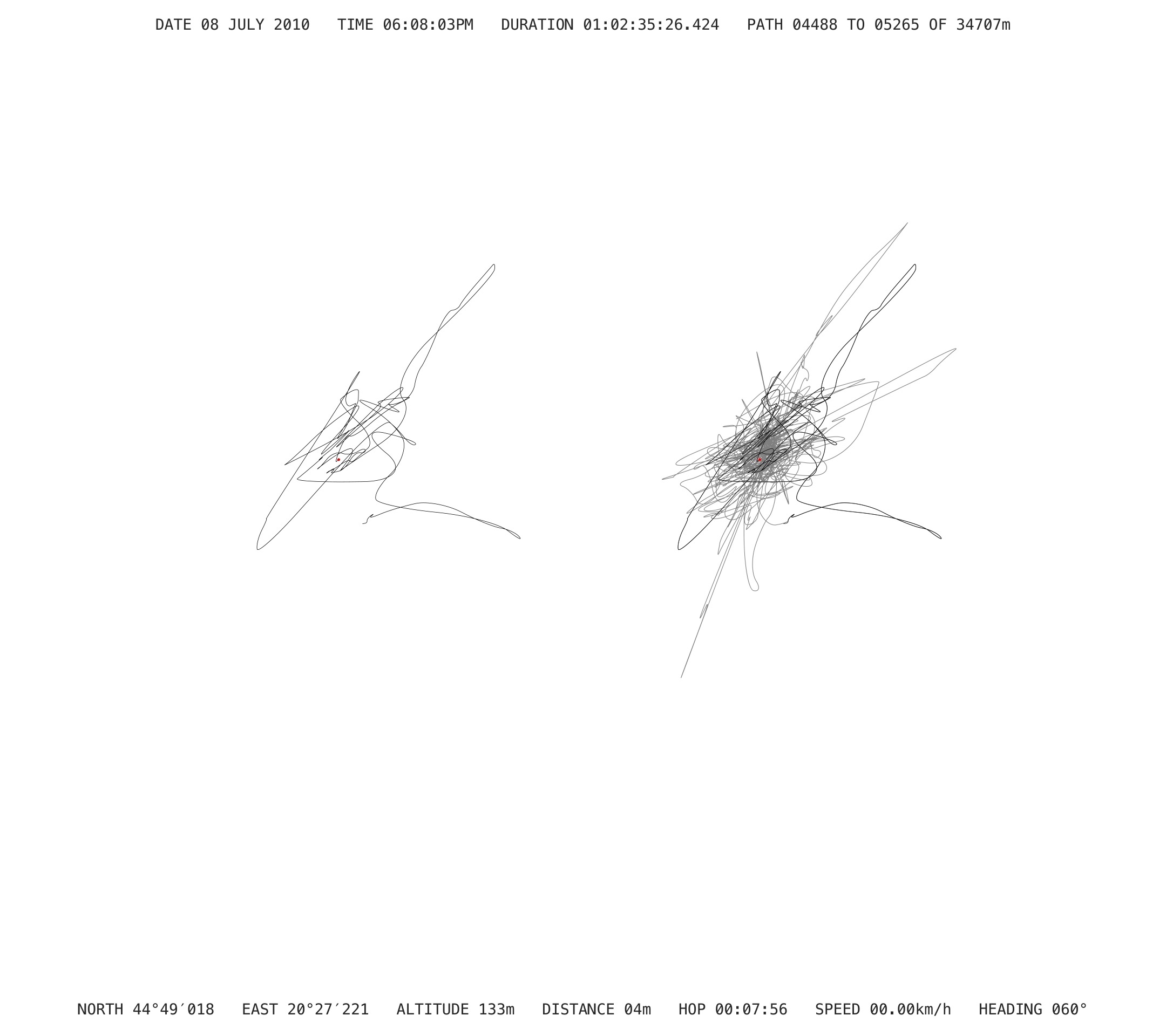 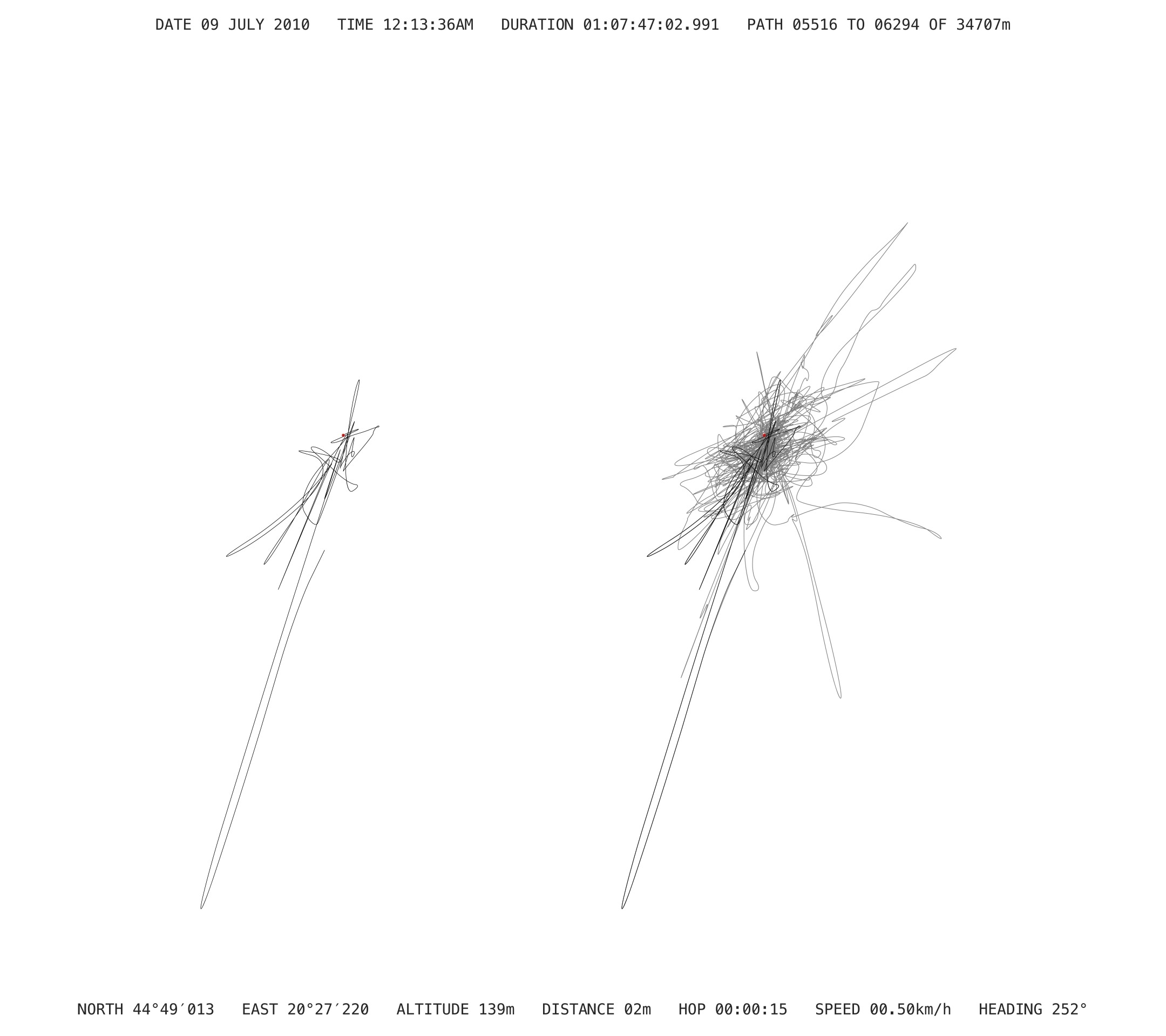 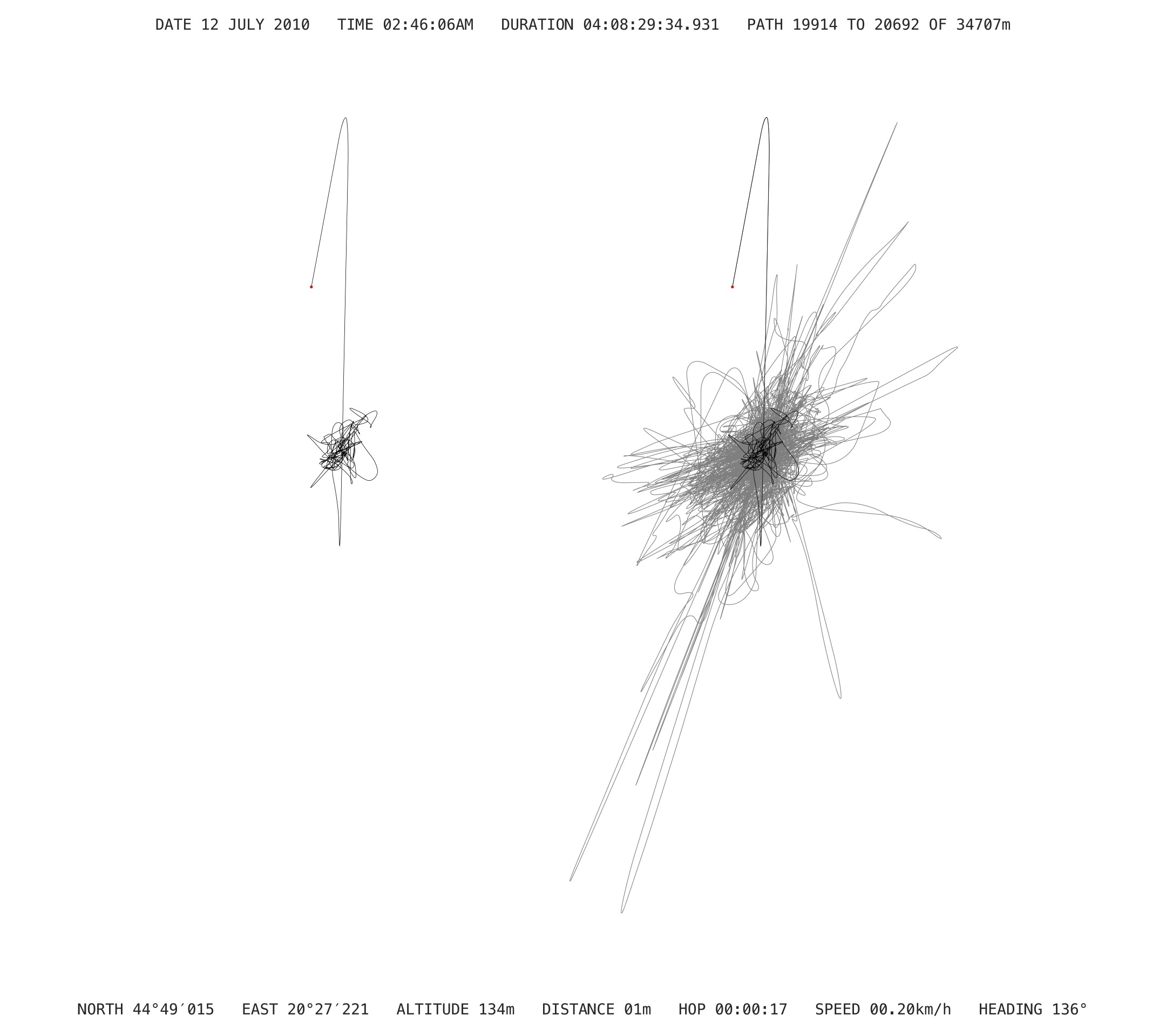 Concept
Study 7/0 explores the positioning errors of a static GPS receiver in a series of media transcoding procedures. It is motivated by the idea of cognitive mapping as a configuration of individual, non-linear, and discontinuous spatiotemporal experiences.
As a wayfinding technological framework, the GPS facilitates a layered set of interactions, observations, preferences, choices, decisions, and compromises that constitute the contemporary way of life. Useful GPS routes are always defined by accessibility and environmental constraints such as geography, traffic, consumption, and communication flows, so the errors of that system point to the idiosyncratic misalignment between the subjective identity and the functional (coercive or normalizing) requirements of human artefacts and technologies. In a broader sense, the individual’s navigation through, and adaptive correction of, the systemic imperfections of complex infrastructures such as the GPS point to the notion that politics, before it becomes collective and public, is always a personal, intimate matter.
While the majority of new media artworks have relied on the accuracy and reliability of the GPS for various forms of mapping, tracing, and transcoding (Wilson 2002), in Study 7/0 we focus on inaccuracy and unreliability which are the logical counterparts, but at the same time also the criteria (measures) of the usefulness of the GPS or any other technology. Rendering the initial animation in 2D serves as a metaphor for dimensional collapse and information filtering or compression, which are central to all wayfinding scenarios, data representation, and mapping. We approach these procedural constraints and the inherent technical limitations of the GPS as conceptual sources for generative processing and expression, in contrast with conventional glitch art which uses error as an aestheticized frontline layer (Barker 2012).
In this project, we also investigate the generative approaches to the emergence, where a simple initial setup of a complex system can produce surprising phenomena.

Dejan Grba is an artist, researcher, and scholar who explores the cognitive, technical, poetic, and relational aspects of generative systems. He has exhibited in the Americas, Europe, Asia, and Australia, and published papers in journals, conference proceedings, and books worldwide. He has served as a Co-founding Associate Professor with the Digital Art Program at Interdisciplinary Graduate Center, University of the Arts in Belgrade (2005-), and as a Founding Chair and Associate Professor at New Media Department, Faculty of Fine Arts in Belgrade (1998-2020). Dejan was a Visiting Associate Professor at the ADM/NTU in Singapore (2019-2020).

Philippe Kocher is a musician, composer, and researcher. He studied piano, electroacoustic music, music theory, composition, and musicology in Zürich, Basel, London, and Bern. He is a lecturer for music theory, composition, and computer music at the Zürich University of the Arts. He is also affiliated with the Institute for Computer Music and Sound Technology (ICST) in Zürich. His work encompasses instrumental and electroacoustic music as well as sound installations. His artistic interests focus on algorithmic composition, and computer-generated music and art. The computer, used for sound and score synthesis, has become one of his most important creative tools. Kocher’s music has been performed worldwide.