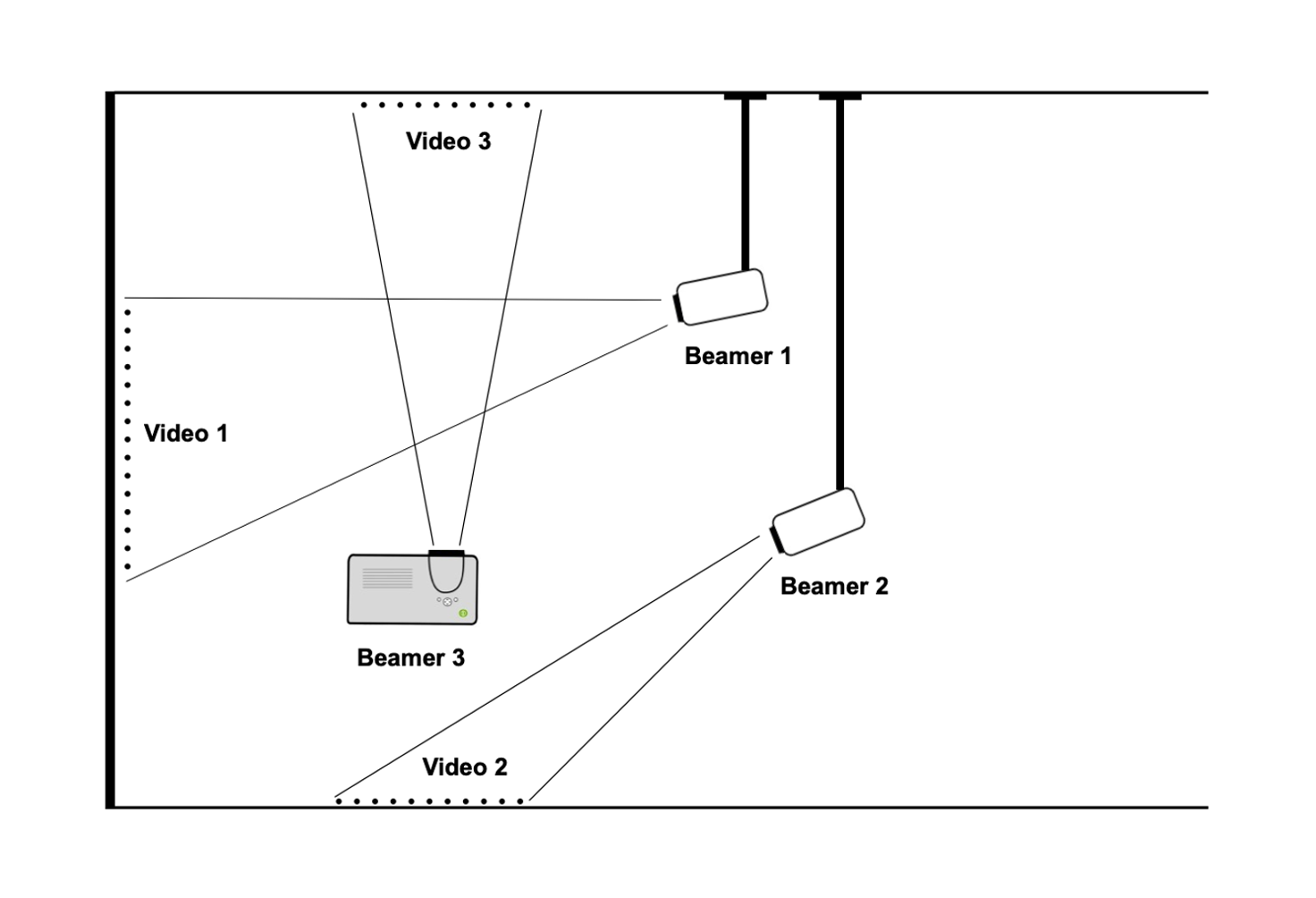 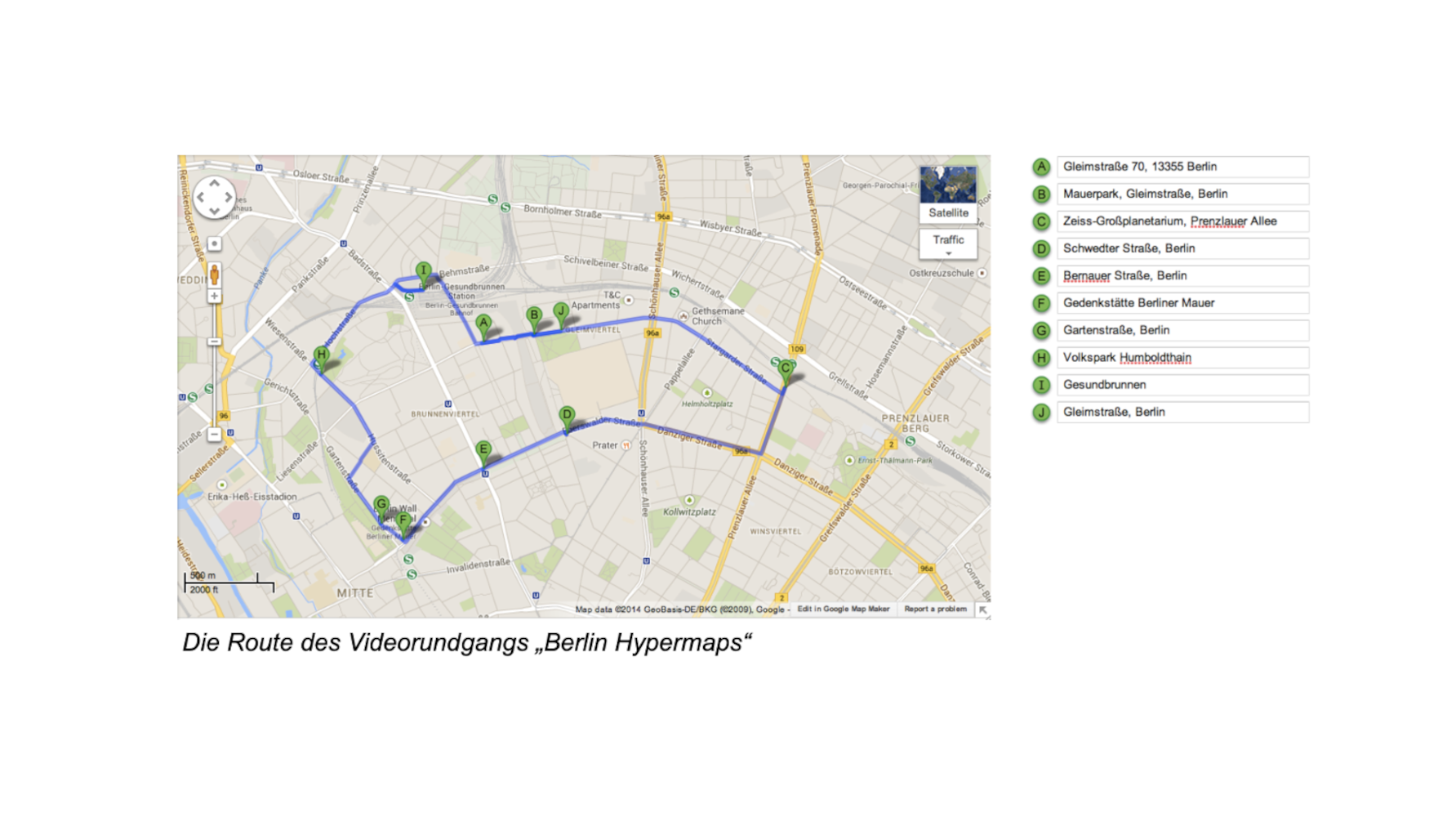 Berlin Hypermaps is an immersive video installation I created in 2014. It allows visitors to experience part of the former border area between East and West Berlin from three different perspectives simultaneously.

It is not only a momentary snapshot alongside some of Berlin’s most well-known past-GDR reminiscences, but also a documentation of an area that has always been in transition and change. Against the backdrop of housing shortage, urban planning and gentrification, a new political dimension has appeared, latently leading to a new kind of wall through the area where Berlin-Mitte, Wedding and Prenzlauer Berg come together. Within a radius of less than two kilometers, there are three urban neighborhoods clearly different from one another.

The project uses the so-called timelapse and hyperlapse recording technique. This technique uses accelerated shots to make visible how time passes and at the same time shows us things that might otherwise escape our perception. Hyperlapse adds a spatial component to this effect by moving the camera with each shot, creating additional dynamics (e.g. a 360° rotation) in the video.

The installation consists of three videos, each of which is played simultaneously with a beamer. Video 1 is projected onto a wall, while video 2 is transmitted synchronously onto the floor. Video 3 is projected onto the ceiling, virtually opposite the surface of video 2. With the help of video 2, the viewer will be able to directly perceive the immediate floor that I walked along for this project. Through the projection onto the floor of the exhibition hall, the viewer will be invited to imaginary walk along with me. Video 1 shows excerpts of what he or she would see while walking along the path from video 2. Video 3 depicts the same area on Google Maps with a point moving along the route. This video is not only intended as a nod to Google’s oft-criticized „top-down“ surveillance mechanism, but the change in perspective is also meant to invert the service’s navigation function.

Reference to the Open Call:

Human access to the world is not only temporally but also spatially determined. Since the modern era, the exploitation and empowerment of space has increasingly taken place through optical tools, techniques of surveying, and imaging processes. The quest to measure and map the earth has ultimately led to the creation of national identities and political conflicts all over the world. What remains unresolved, however, is the relationship between the map’s claim to universal validity and the shape of its individual access. How do media and cartographic practices constitute subjective spatial perception and lifeworld? What role do maps, city plans and GPS data play for one’s own localization, environment and mobility? What else can be a localizing reference besides the map? Which spaces are opened up and which territories are developed?

Since the so-called spatial turn, science has elevated space, along with time, to the central descriptive category of cultural perception and social relations. In this context, the current practices of using geo-information services such as Google Maps prove to be a particularly striking symbol of the convergence of place and mediality.

In this context, Berlin Hypermaps explores the question of the medially constructed nature of space. The immersive installation is dedicated to the reflexive mediation of orientation, signposting and movement in space as well as the positioning of the human subject within it. It interweaves the representation of cartographic evidence with subjectively experienced moving images and in this way explores the supposedly graspable paths of the everyday and the immediate.