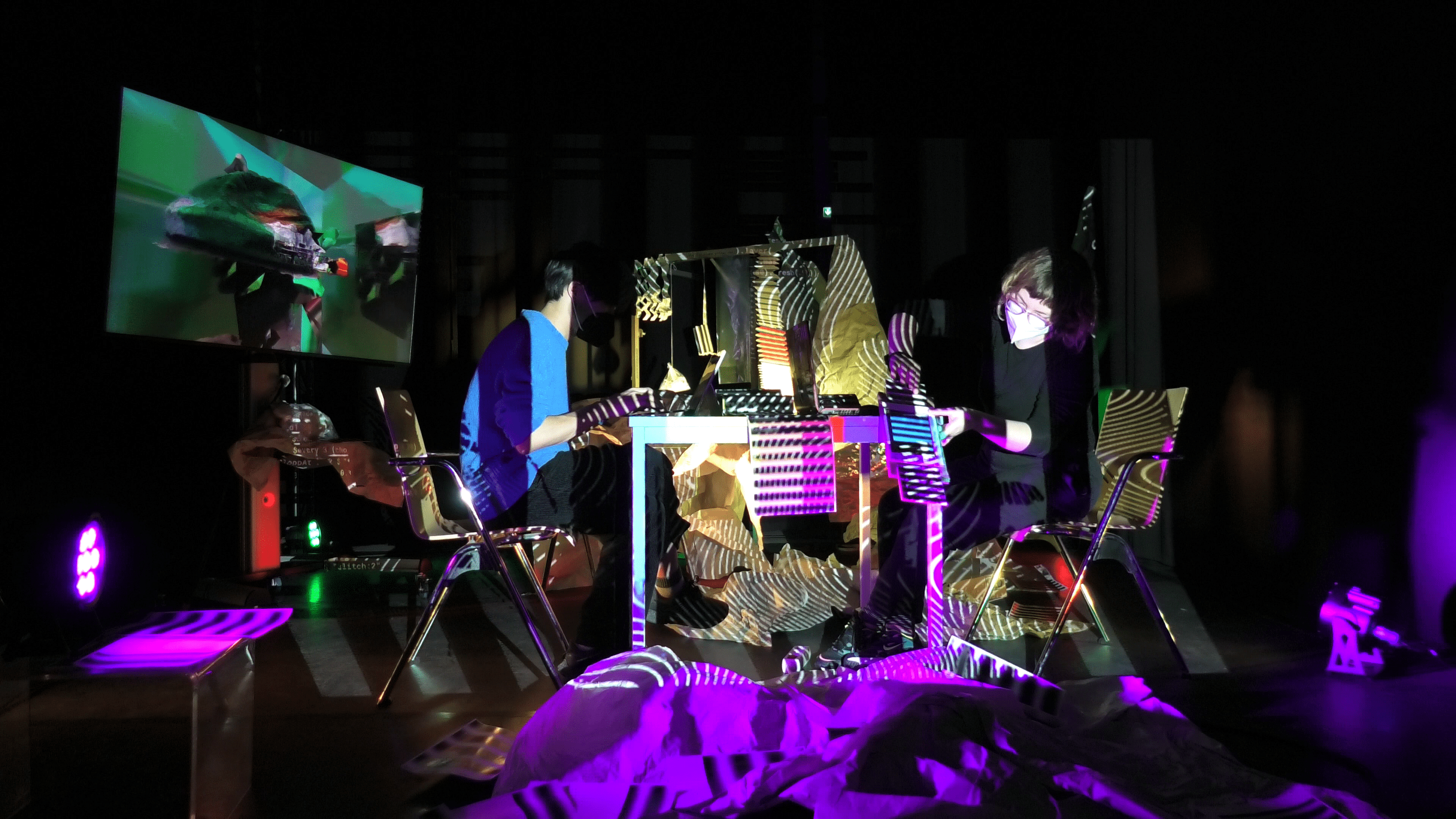 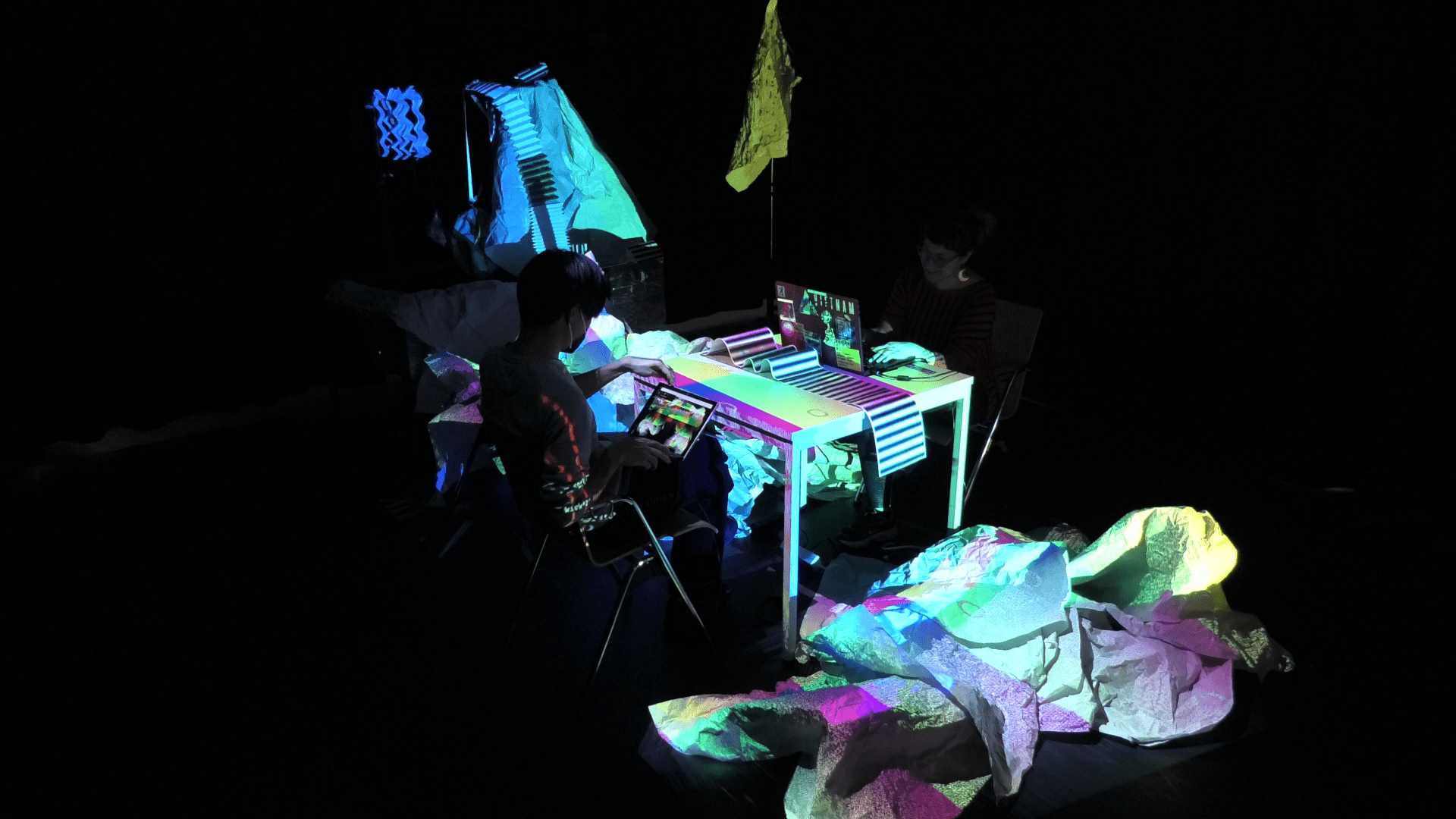 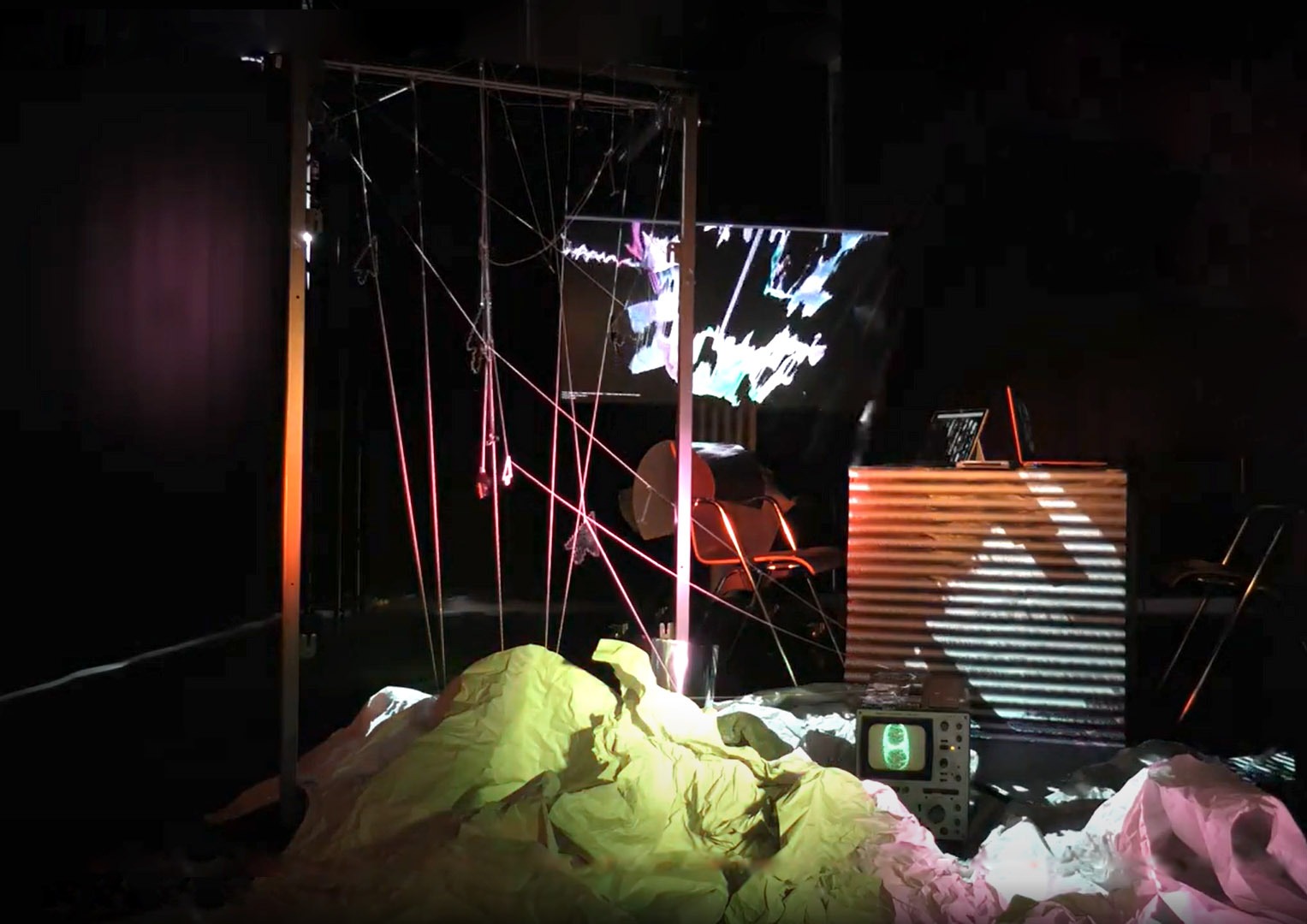 GlitchMe is a laboratory of witchcraft around composition of scenic objects and decomposition of algorithms invoking a network of feedback loops. Digitality can become dreams moving and interacting in multiple spaces in a non-linear time. Through feedback loops we create windows that can open new possibilities to narrate distorted and “glitched” worlds.

The presentation will be a performative installation; its components, such as projection of live-coded visuals, servo motors, scanned 3D models, strings aligned as the warp of weaving, crumpled paper, laser-cut pieces, algorithmic and reactive sound from speakers, exhibit not only traces of making but they live together to create a landscape. Everyday, the artist duo dismantles and builds the installation all over, working with the dump: the storage. What is left is important to use; the trace of something, in this sense, is a treasure for us. We collect trash, take 3D scans of spontaneous scenes that appear on the street, for example an abandoned bicycle hanging on a tree. We write code, we read and write texts, then describe with words on whiteboards, and also sketch scenes with objects and lights on a possible stage.

We wonder about this process of research, which led us to the question about the relation between humans and machines. Absence and presence of the body, or machines as an extension, a lot of cameras live streaming or just recording that creates multiple points of view, besides the scenic physical one.

We create scenic objects that dialogue with virtuality, reflecting or mirroring. Paper and projection mapping are built through code, we aim for conversation between immaterial and material things. We try to move and interact with the bodies in the presence but also virtual bodies.

After 2 years of online collaboration, we started a fellowship at Academy for Theater and Digitality in February 2022. As a niche practice to perform with programming on stage, live-coding is rather a new practice in digital art. The artists push the limit of live-coding by applying it to the entire creation process; the visuals, sounds, kinetic motor movements and lights are also live-coded, and the practice bleeds into drawing, weaving, printing, and cutting. The practice manifests decolonization from the productive and design-centered process of technology, namely hacker witchcraft. To practice hacker witchcraft means to alter what is given, bring new usages or meanings to reality that doesn’t fit for everyone. In this sense working with a glitch means to find the beauty in what is not perfect and should not be either. In literature, there is ‘magical realism’ and this means not to talk about mimesis in a story, but to find the magic in common things, something that in daily life sometimes it is hard to see. Dreams in this sense, do the opposite way, symbolism and objects from reality appear in a world that is not real.